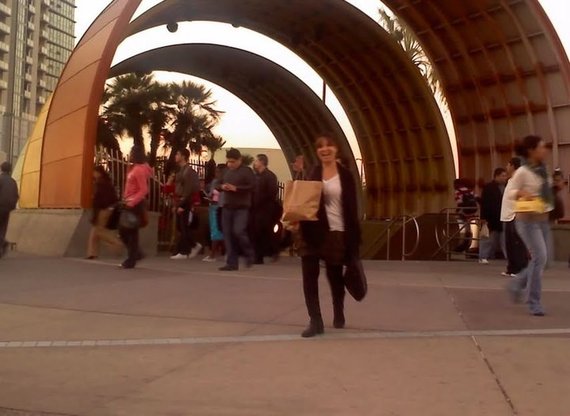 Is it wrong that I sort of wish that ONE man would catcall me when I walked down the street?

This was my initial reaction to the Catcall Woman Video that went viral late last year. I felt dirty even thinking that out loud. Like perhaps I was a bad feminist, or maybe not as self-loving as I should be. That Gloria Steinem was going to knock at my door and ask for her fan club card back. I felt like I was betraying woman-kind by merely thinking it, and quickly tried to shove it away into the guilt-ridden depths of my inner psyche.

I’m a friendly person by nature. I say hi to everyone. I’ll hug you when we meet. When someone tells me to “have a nice day,” I don’t immediately think they want to fuck me, I believe that, perhaps, they really do want me to have a nice day. That is when they bother acknowledging me in the first place.

As a 50-something woman living in Los Angeles, I often feel like I’m wearing a cloak of invisibility. As I walk through crowds of people, I make eye contact only to find that no eyes are returning the favor. My hellos fall on deaf ears. My smiles go unreciprocated. For the most part, heads are down, eyes focused solely on cell phones, or staring straight ahead. People are engaged in phone conversations, oblivious to anything going on around them. I’ve said that if I were single, I don’t think I’d stand a chance meeting anyone in this town, because it’s a place where no one looks at anyone else except their own reflection in passing store fronts. Especially if you’re over 25.

Then I have to take that thought a step further and ask, are they not looking up because I’m old? Is it the hand sanitizer dangling off of my purse strap? The reading glasses perched on the tip of my nose? Or are they not looking up because they’re all just self-absorbed? If I looked like Kim Kardashian, would men tell me to “have a nice day?” What am I missing out on?

Sure, pedestrians in Los Angeles are a rarity. Most women spend hours a day enveloped in the safety of their steel fortresses on wheels, not having to worry about being harassed by the men around them. We drive, faces forward, in a fog, inching forward on freeways that rarely move beyond 11 miles an hour. If we do interact with people around us, it’s normally with middle fingers raised or a both hands in the air “It would be nice if you used your turn signal!” gesture as someone cuts us off without notice. A pedestrian society we are not.

I just don’t feel the threat or the anger or the resentment that so many have experienced while watching this video. Frankly, I’m more threatened by the people at the mall kiosks who try to get me to buy shit — “You look like you could use a salt facial scrub from the dead sea!” “I can make your hair look healthier with this flattening iron!” “How about you come smell this new Versace perfume!” — than I am by males on busy city streets. It’s more of a threat to my femininity that someone tells me my hair isn’t shiny enough than it is if a man tells me I look pretty today.

A female blogger, in a follow-up post to the catcall video, wrote, “Here’s the thing: by the inherent nature of being a woman walking in the street, almost ALL uninvited attention from men is threatening.”

Since when? When did we turn from a society of men tipping hats to women as they walked by to a generation of women who can’t look a man in the eye without thinking they’re somehow prey? Isn’t it possible that men maybe, just maybe, really think you’re pretty and want you to have a joyous afternoon? How about just saying “thank you,” and moving on with a smile? Turn that anger into self-confidence. Trust me, it really is more empowering. Not all men are assholes. And contrary to what you may want to believe, not all men want to conquer you.

So to my middle-aged sisters I ask, am I alone here? Do you feel the same way? I’d love to hear your comments.

Lisa Goich-Andreadis is an author, talk radio host, former comedian and Detroit native living in Los Angeles. She manages the Jazz & Comedy Fields for The GRAMMY Awards. Married to Guns ‘n Roses keyboardist, Teddy ‘Zig Zag’ Andreadis, the two share a home with four dogs in the San Fernando Valley area of L.A.  Lisa blogs regularly for the Huffington Post and can be heard as a special guest on “The Mitch Albom Show” on WJR-AM in Detroit. Lisa’s memoir, “14 Days,” will be released November 10, 2015 and is available for pre-order on Amazon. For more information on Lisa and her projects, visit her website at http://www.lisagoich.com.

Begin typing your search above and press return to search. Press Esc to cancel.